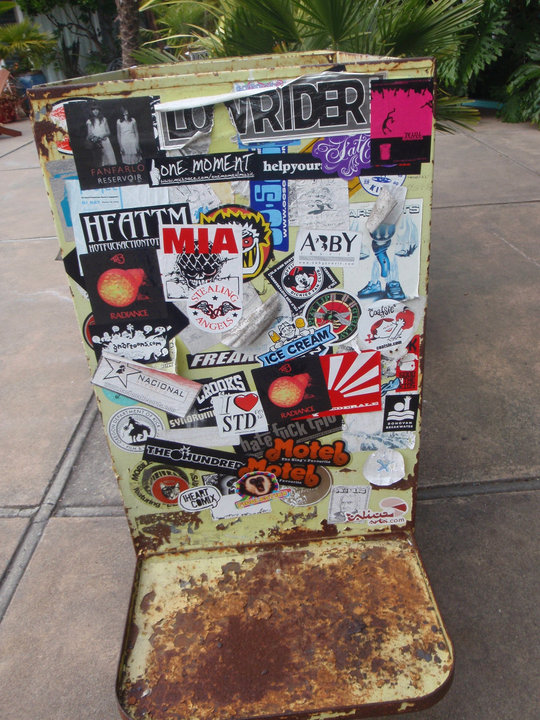 2:19 PM
BOB:
I walked around the Tenderloin today and ate some phở in a place that looks like it should not be allowed to serve food. It turns out that the phở was kick ass.  I usually skip the tendon and tripe phở in favor of the raw beef, but the language barrier was insurmountable, so I got all the chewy goods in my bowl.  And I ate that shit up.  It was pretty damn fine/gross.

Walking around the tenderloin makes me think I’m in Harlem circa 1976.  Not that I have any clue as to what Harlem was like in ’76, but this is what I imagine it to look like. 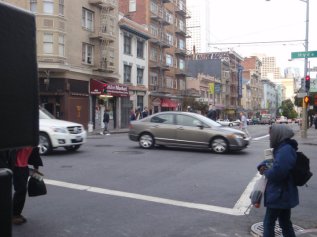 The more I walk around, the more I realize that S.F. is half filled with crazies, half filled with drunks/dopers and half filled with bums.  It’s kinda awesome, but considering that 150% of the population with nothing to lose and all have that hariy-eyeball look like they wanna skewer you with a rusty switchblade, it’s a tad scary.  But the good kinda scary, like auto-erotic asphyxiation.

4:34 PM
CHAD
Derek and I walked down to fisherman’s wharf this afternoon, and he did something very touching that I wanted to mention to everyone. We had just gotten a bowl of clam chowder, but not a normal bowl of it, rather a bread bowl. The bowl was made completely of bread. Derek bought this of course, just as he has bought about everything else we’ve consumed in San Francisco, because he is an extremely generous man. When we were done eating, he walked over to a trashcan with his bread bowl, but instead of putting it in the can, he placed it on top of it and said, “I’m going to leave that there, in case a bum wants it.” Throughout the day, I saw numerous pigeons, gulls and bums all feeding on discarded bread bowls. I even saw a waterlogged bread bowl in the bay being nosed by a couple of sea lions. Apparently, an entire ecosystem has built up around the bread bowls of fisherman’s wharf. Here’s three or four minutes of relaxing sea lion video for those of you languishing away at your desks and receptacles:

8:49 PM
BOB:
I left Chad in San Fran and drove out to Sacramento.   I’m pretty sure Chad is doing fine all by himself.  He’s probably fucking something right now, in fact. Meanwhile, I’m in the lobby of the Majestic Theater (at the Tower Theater), and it’s a big crowd with loads of derby gals.  Hopefully, I’ll land a crash-pad and won’t have to drive back to S.F tonight. TBD. 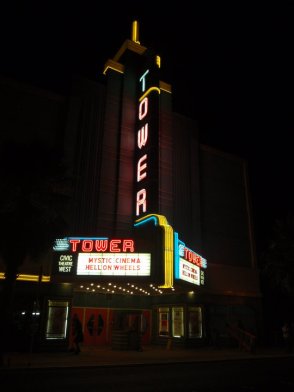 11:59PM
CHAD
Ended up meeting with Austin’s own Nesta Gerberding tonight, and she came out with me and a couple of local ladies I’ve been hanging out with. We all went bar hopping in “The Lower Height” and much fun was had by all. Oh! I broke up a fight!! I always hate it when I see fight videos on the internet because I feel like the people taping or watching the fight should be breaking it up. Well, I found myself in the unique position of being the guy taping the fight, but was still compelled to break it up. I know some of you would have preferred I get all the fight on tape, so I made a compromise. I took out the camera and recorded a couple seconds of action as I approached the guys, then put the camera back in my pocket and broke it up. Here:

Also, I ate a box of Chinese food that someone left on the bar, falling back on survival skills I learned in Seattle: